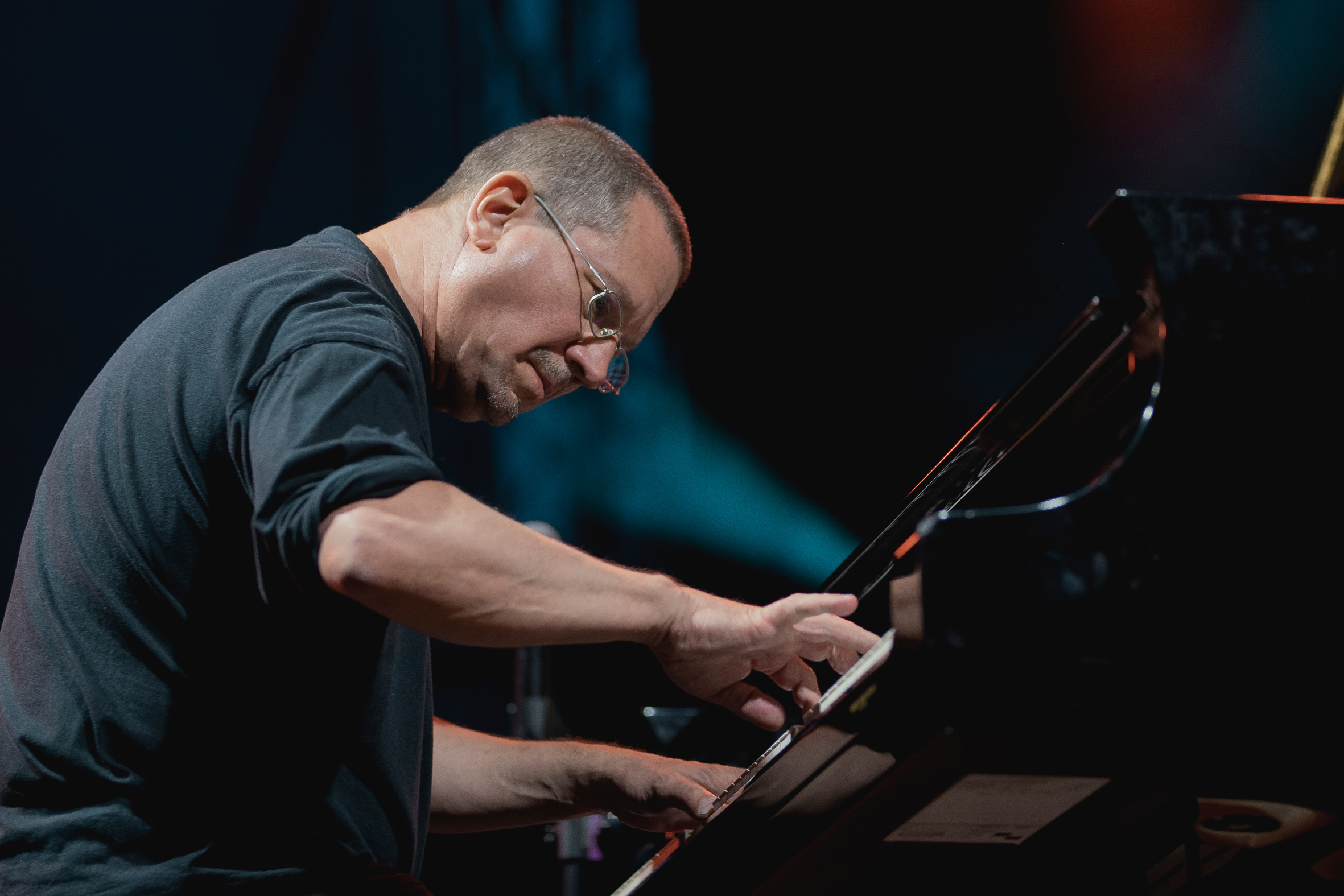 Chris Jarrett was born in 1956 in Allentown, Pa. and raised in the Appalachian Mountains of Eastern Pennsylvania. He never doubted that he would become a composer, but economical and family problems hindered his musical education until Virginia Waring (wife of Fred Waring) introduced him to the Austrian pianist Vincenz Ruzicka (of Dougherty and Ruzicka, piano duo) at the age of 13. Ruzicka, a student of Rosina Lhévinne living in the Pocono mountains becomes his most important teacher.

Jarrett continues his musical studies at Indiana University and Oberlin Conservatory, where he receives a partial scholarship. Disappointed with the environment and musical standards of these institutions, he leaves for "the road." He says that it was really then that his career as a creative musician began ("15 Questions with Chris Jarrett"). Jarrett unwillingly gets to know the hardships of work on a shrimp boat, in various factories in Texas, in offices in New York. He travels, first the U.S. and then Europe, by thumb in a wild quest for survival and first-hand knowledge.

It was in North Germany that friends give him what he needs – a new musical start and a job. Within a short time, he studies, and then teaches at the University of Oldenburg. He composes small political piano compositions and then the full-fledged ballet "For Anne Frank", which is premiered in the Oldenburg Palace in 1985. After this important year, Jarrett's career is on its way. First LPs are "Tanz auf dem Vulkan," and "Aufruf/Outcry". He becomes an unusual, critically thinking and engaged musical figure in Oldenburg – and more and more in all of Northwestern Germany. 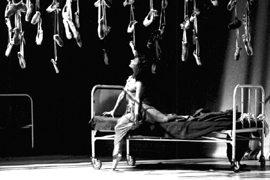 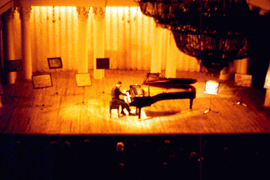 From 1985 to 1990, Jarrett writes film music ("Danton", "Faust", "Battleship Potemkin", among others), a symphonic ballet ("… Liebt Mich Nicht" – Oldenburgisches Staatstheater; Choreographie: Ingrid Collet) and a Choreadrama ("LP" – Nada Kokotovic). He tours Central and Eastern Europe as a solist and composer. In Berlin, he presents his first "motivic" improvisations with German musicians. He develops a friendship with the Austrian poet and translator Erich Fried, and tours with him, performing his own compositions, during some of Fried's very last public readings in 1988. Especially notable are the performances of his ballet music in the Soviet Union in 1986 and 1988 (Moscow, Alma-Ata, Mahachkala, etc.), and his intense work in the Yugoslavia of this period.

In the early 90s, Jarrett begins his biggest composition to date – the opera "John Donne – a Poetic Opera." He leaves North Germany to move to the "Middle-Rhein" area of Germany near Koblenz. Here he completes new projects, such as an oratorio for trombones, organ and chorus, "Erlösungen 3?" ("Salvations 3?"), premiered in St. Wendel, Saarland, and "Hände" ("Hands"), a composition performed to introduce a speech by the German president of that time, Richard von Weizsäcker. New solo CDs are "Fire" and "Live in Tübingen." He also finds time for recording sessions with the famous Hungarian violinist Zoltán Lantos and launches on an extremely successful solo-piano-tour of the concert halls of the Ukraine, including the Philharmonic Hall, Kiev. Other colleagues with whom he works at this period are Ramesh Shotham, Urna Chahar Tugchi, Ralf Siedhoff, Dorsaf, Dhafer Youssef, Muhammed Zine-el-Abidine and many more. Chris Jarrett's interest for "ethnic" music had always been intense, and it blossoms in the 90s leading to many tours of Tunisia and Northern Africa.

Jarrett tours Poland, Germany, Serbia and France in 2001/2002, but also dedicates himself to the foundation of the Chris Jarrett Trio with Karim Othmann Hassan (Oud) and Shakir Ertek (drums). Along with such musicians as Wolfgang Dauner and D.R. Davies, the trio concertizes at the opening of the Theaterhaus Stuttgart in April, 2003. This year also sees the premiere of Shakespeare's "Romeo and Juliette" in the Young Person's Theater, Düsseldorf (Germany) under Guido Schumacher's direction and with new stage music by Chris Jarrett. During a solo-tour of Serbia in November, Jarrett plays in the renowned Kolarac Hall, Belgrade ("Carnegie Hall of the Balkan") where he is rewarded by a thunderously thankful audience. Solo piano CD productions of this time include "Scenes and Preludes", and "Short Stories for Piano" (Edition Musikat, Stuttgart). The Chris Jarrett Trio releases the CD "New World Music" (Edition Musikat, Stuttgart).

Jarrett's composition for 2 pianos, clarinet and percussion, "Suite Grecque" has first performances in Athens, Thebes and Alexandroupolis in 2004. Continuing his career as a film music composer, Jarrett writes music for Karl-Heinz Heilig's "Geträumtes Leben, Gelebter Traum" and is invited to the Cairo Opera House to perform "Suite Grecque." 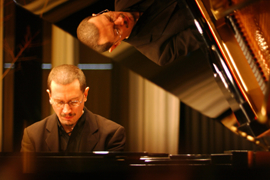 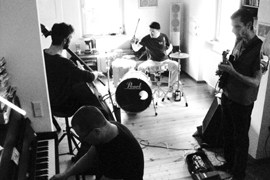 The beginning of 2005 sees the founding of a new formation: "Four Free." Three of France's most talented improvising musicians (Adrien Dennefeld, electric guitar; Jérôme Fohrer, double-bass; and Pascal Gully, drums) and Chris Jarrett make up this "chamber-hardcore" ensemble with it's own very special sound. The same year witnesses the creation of a piece written especially for performance during the soccer world championship in Germany in 2006. "Viertelfinale" ("quarter final") for 11 strings and conductor/referee consists of motives translating a football game (and not without humor) into the language of contemporary music.

Aside from some concerts in Germany and the U.S. (New York City, Maryland), Jarrett's concertizing and compositional work is interrupted for a few years after the birth of his son Ivan Shaoki, in Paris, in 2006. But his new role as a father in Paris is as inspiring as it is complicated, and his work continues with new vigor in 2008. The virtuoso accordianist Jelena Milojevic performs the music of Chris Jarrett in Weil Hall at Carnegie Hall, New York in 2009. The piano piece "The Simmer" is dedicated to his son.

In the following busy years, there are new projects with the Turkish saz-player and composer Ismail Türker, with the Wagnerian soprano Jayne Casselmann in an Eisler/Tucholsky programm, with the creation of a satirical work about Jacques Offenbach (commissioned by the Offenbach Festival, Bad Ems) and with the development of an extensive and "game-changing" music history course. The CD "Wax Cabinet" with his group "Four Free" is released by Edition Collage, Munich in 2010. Jarrett tours Canada, Austria, Croatia, and various parts of Germany, where he now again resides. A 2012 solo tour of the Prekmurje and Apasko Polje areas of Slovenia, where his family origins are to be found and where he still keeps in close touch with relatives and friends, is especially remarkable.

Since 2013 Chris Jarrett begins to intensify his teaching activities by leading workshops for piano improvisation. He dedicates himself again to composing new piano music (his wife, the pianist Martina Cukrov Jarrett now regularly performs his compositions). He produces a new CD with stories by the Russian author Ludmilla Petroshevskaya (recited by Julius Pischl) and begins a new musical journey with the renowned Italian violinist Luca Ciarla in a duo formation. 2014 also sees the beginning of a new chapter in Jarrett's musical career, and in September of that year, his first CD with music for the pipe-organ appears: "New Journeys" - organ improvisations by Chris Jarrett (Atrius Records). In the same month, he performs the first performances of two piano works commissioned by the Mozart Society of Rovereto, Italy: "Hommage a Mozart" and "Rondo a la Wolferl." In 2014 and 2015, extensive concert tours with Luca Ciarla in duo formation, and with his band, as well as with solo concerts are sending Chris Jarrett on tour to Italy, France, Australia, Indonesia and Singapore. The new CD "Offshots" by "Four Free" is released in 2016.

2017 sees the creation of a new duo project with the German drummer Erwin Ditzner ("Variations for Piano and Drums") as well as the release of Jarrett's new solo CD "Tales of our Times" on Centaur Records, Louisiana, USA. In October, Chris Jarrett concertizes on one of the finest organs in the world: the Silbermann organ of the Petri Church in Freiberg, Germany.

In 2018, Chris Jarrett and his wife Martina Cukrov Jarrett form a duo-piano unit which performs Jarrett's own works as well as improvisations on the music of Bela Bartok. In 2019, Chris Jarrett appears with Leszek Mozdzer in an especially noteworthy performance of his composition "Udo's Cheesecake" at the Enter Enea Festival in Poland. "Erwin Ditzner/Chris Jarrett Live @ Enjoy Jazz, 2019"
- a recording of a live duo concert with Erwin Ditzner, (drums) and Chris Jarrett (piano) in the "Alte Feuerwache," Mannheim, Germany is released as CD and LP in 2020. His organ performances include an appearance in the Rhein-Mosel Halle, Koblenz, Germany. The "Sechs Hölderlin Lieder" for baritone and piano are among the most important compositions of the period 2019/2020.

As of 2019, Chris Jarrett teaches music history as a guest lecturer at the University of Mainz, Germany.

Chris Jarrett utilizes the structures of classical music and the freedom of jazz improvisation. He combines his secure instinct for formal structures with the spontaneity of jazz. Great influences to be heard in his music come from as diverse a list of personalities as Johannes Ockeghem, Sergej Prokofiev, Charles Mingus and Frank Zappa.

"Chris Jarrett's music is not simply heard, it is experienced, felt, absorbed and assimilated. Compositions of beauty, power and delicate themes from structured improvisation and jazz, classical compositions, orchestral collaboration, ballet and a classic film score able to alter the very context of the film. He incorporates such a wide range of influences that embody self contained chaos, floating structures carried by classical themes with influences of orchestral music, jazz, european folk music, and pure abandon. His music is a force of nature and an act of grace."
Chris Stewart 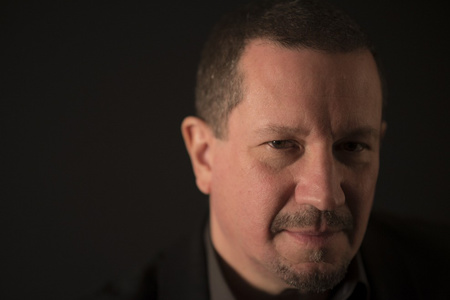