Before 2014 I have only very seldom had the opportunity to play the organ. Outside of two solo pieces which I performed once, and an organ part in my oratorio "Salvations 3?" I have had little contact with the instrument at all. On the 11th of July, 2014 I began a new journey, experimenting with the improvisational possibilities of the Beckerath organ in Herxheim, Germany. A DVD and a CD have been produced to document this very spontaneous musical experience.

Since then, I have continued my new and adventurous journey and have found that each new instrument leads me to new crossroads of sound and expression. No two concerts have ever been the same. The title only remains: New Journeys.

CRACK IN THE DOOR TO SOMETHING GREAT - The organist Chris Jarrett polarizes listeners with his music in the Weilerbach Protestant Church.

"The "New Journeys" heard in the Weilerbach Protestant Church on Sunday were adventurous ones - full of cliffs and rough rivers. With his improvisations on the newly-renovated Walcker organ, the U.S. American, who lives in the Rheinland Palatinate, served the some 350 guests no light meal. Those not afraid of contemporary music, however, were indeed well-served.

After a normal concert, the listeners leave the hall and go home. Not so, after these unusual "New Journeys". Many continued to stand in groups, discussing what they had just heard. Chris Jarrett used his talent to polarize the audience. Some felt that the music was of the highest quality ("world-class"), others showed more scepticism. A few left the church after the intermission. Jarrett was aware of this danger from the start: an artist creating something alive with the spontaneity of the present, the atmosphere, the audience, the hall and instrument as they are at the very moment. 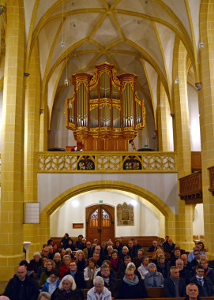 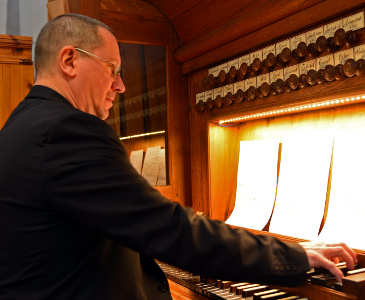 From the very beginning, the artist let his ideas flow freely, to recite his monologue, which would soon become a dialogue with himself. A rebellious, unruly tone sets in, mixed with a sense of duality and ironic distance. This combination, marked by shrill colors or consciously exaggerated gestures, brought the music to a level of something surreal. The audience is confronted with musical crossovers and structures of extreme complexity, utilizing subtle changes in density, sound and musical weavings. We hear the jabbing and interlocking of surfaces and masses.

This may have led to some shock-reactions within the audience, faced with this large-scale gradation of harmonic colors and sound-surfaces. But Jarrett's music was rich with a wide range of differentiated clusters, for which he developed a whole catalogue of performance techniques such as different forms of vibratos and tremolos. The inner structure was enlivened through parallel glissandi and musical quotes - such as "Eine feste Burg" in the second part of the performance. 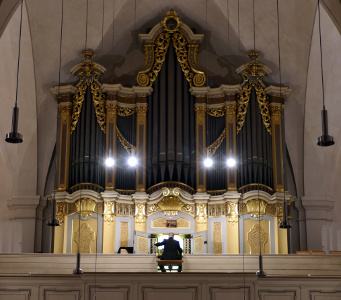 Gottfried Silbermann organ in the Petri church in Freiberg

Jarrett sat in front of the keyboard, playing freely, sometimes bobbing with his music. Highly dynamic, consonant and dissonant layers pulsed within a very slow and cautious rhythmic frame. These rhythms flowed freely onward, but the stream followed a clear direction, a central emotional goal, surrounded by ever-widening circles. Rotations and irritations, sudden, wild hunts and explosions thundered down on the listener. The composer "pulled all the stops". It was simply unbelievable what he got out of this organ. The more the tensions rose, the stronger was the desire for resolution. These came in seldom, light-filled moments. Then Jarrett was able to prove that he could also master poetic moments. Unfortunately, these were too rare.

The excitement felt was like a whirlwind of gargling floods of sound shooting off one wave of goose bumps after another straight through your body and setting all emotions free. The hopping of the staccati and the rumbling of the bass filled the whole room in this large church. This musician utilized all techniques and styles, wildly improvising with volcanic energy and then suddenly side-stepping. But he was also able to fall into meditation, reaching the highest level of musical beauty. The evening was an emotional roller-coaster, at the end of which the listener could be sure that here the door to something really grandiose had been opened. Prolonged, enthusiastic ovations."

Jarrett‘s Art is an experience which shows us that the riddling and the mysterious in life are not only harbingers of insecurity and fear but are also gifts of enrichment and beauty for those who dare to take on the challenge." 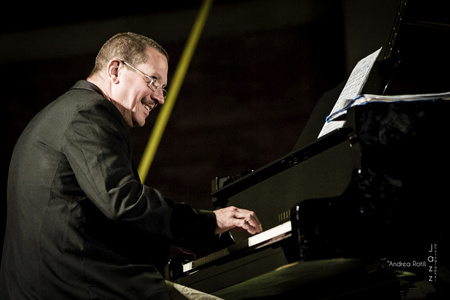